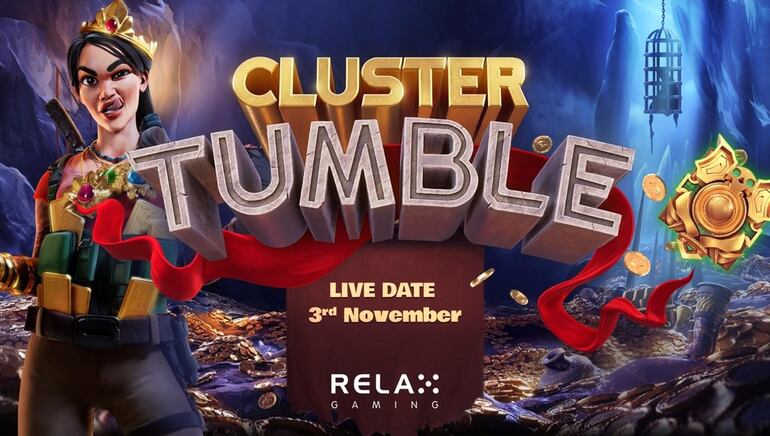 Offering an exciting bonus feature with growing multipliers and the maximum win of 20,000x the stake, the new slot by Relax Gamins is likely to capture the imagination of the players.

Cluster pay slots have been very popular with the players in New Zealand and worldwide lately. Following on that trend, Relax Gaming has released their latest slot named Cluster Tumble, inviting players to join bold explorers on their adventure in the Himalayan wilderness as they seek to unearth hidden treasures from an old temple.

The game is actually the fifth title in the company's tumble series, which started with the very popular Temple Tumble slot. The new game isn't just a copy of previous titles, though, as it brings some exciting new elements.

The Cluster Tumble slot features an 8x8 grid, but at the start of each spin, most tiles on the grid are blocked. To expand the grid, players need to form winning clusters containing same symbols, which explode adjacent stone blocks, creating more room for new winning combination.

To achieve this goal, the game offers help in the form of wild symbols (that can remain on the board for several spins) and power up blocks that bring extra wilds, lightning wins, and symbol transforms.

To trigger the bonus feature, players need to either land three scatters anywhere on the board or clear the entire grid. While the base game is action-packed as is, it is in the bonus feature that Cluster Tumble shows its true potential.

Regardless of how the bonus feature is triggered, players are awarded five free spins to start with. Clearing the board of all stone blocks during the feature awards additional three spins and increases the win multiplier to 3x. If the board is cleared again, the multiplier increases to 6x, then 9x, etc. Also, any individual scatters that land during the bonus award an extra free spin.

For those who don't like waiting, Relax Gaming has also incorporated the bonus buy feature. For 100x the stake, players can buy the regular bonus. For 200x the stake, it is possible to buy a more volatile feature, where the first multiplier is 6x and then increases to 12x, 18x, etc.

The Cluster Tumble slot comes with the maximum win of 20,000 times the stake, which makes it a very attractive proposition for players seeking big wins. Quality graphics and exciting sound effects further contribute to the overall experience, making every spin enjoyable and filled with suspense as once the wins and wilds start rolling in, the sequence can last for quite a while.